Lawn Bowls and the Power of Brylcreem. 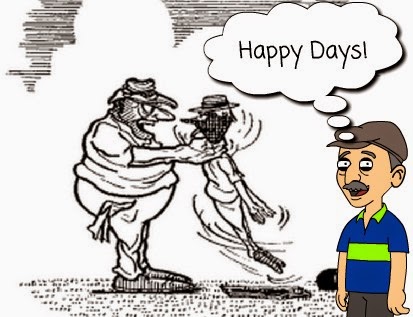 Today I’m going to explain why:

When I started bowling as a young lad I had to be very careful what hand signals I used on the green. Most of the bowlers in those days were ex-miners with short tempers and no sense of humour. Hard to believe now but back then I was a bit naïve and thought everything my father did was universally acceptable practice.
The game against Wattstown proved it was not.

The Wattstown boys were always a touchy lot at the best of times and Saturday afternoon was never one of them. It was the first round of the Carruthers Cup and the score was level. Our rink was the last left on the green and the rest of the bowlers crowded around the edge like they were circling a couple of prize fighters locked in mortal combat. The opposition skip, a beast of a man called Mansell Ketley, was about to bowl. We were holding shot and you could cut the tension with a knife.

My father was our skip and stood behind Mansell as he prepared to deliver his bowl. He looked down the rink straight at me and shook his head sadly just like he did when the bailiff loaded another piece of our furniture onto his van. For a moment I was transported back to our bare little living room staring at the back of the beefy bailiffs as they struggled to get the sofa out through the front door. I raised my two fingers in a gesture of defiance as my father had taught me. A deathly hush followed by a sharp intake of collective breath whistled around the green like an oncoming storm. Mansell slowly put down his bowl and then the storm broke.

I see his purple face looming larger and larger in my recurring nightmares as he stomped down the green towards me. My father bless him, always sensitive about my welfare, covered his eyes with his hands. His was the first face I saw when I regained consciousness. He offered me his hand and pulled me up to my feet. I can still remember the sadness in his voice as I wobbled unsteadily in front of him.
“,” he said, “we bleeding lost again!”
Then he turned and trudged forlornly back to the club house.

But I digress. Here’s the video teaching bowlers how to use two fingers so they won’t get clobbered by bad tempered opponents with no sense of humour.

Bit too technical for me, I’ll be showing you a simpler method in a future post
Now here’s how Brylcreem, who would be a brilliant sponsor by the way, can give you the edge in a tight game. Sadly Brylcreem has gone out of fashion since the invention of hair gel. You know the stuff, sort of liquid Viagra for your follicles. In my reckless youth I used to be a Teddy Boy and any kind of Viagra would have been a ‘no no’ in those tight drainpipe trousers we used to have to wear. If your flick-knife ever went off in your pocket you were in deep trouble let me tell you.

For this method you will need:
i) a healthy dollop of Brylcreem smeared all over your hair (which you then comb neatly);
ii) two absorbent rags. It is very important you keep one rag in your left trouser pocket and one rag in your right. NEVER MIX THEM UP.

Now imagine the game is going against you because the opposition is wicking off everything under the sun. After the completion of a particularly depressing end kick the woods back making sure at least two of your opponent’s lands in the ditch. Run you hand through your pre-prepared Brylcreemed hair and sportingly pick up your opponent’s woods with your generously smeared Brylcreemed hands. Now reach in your LEFT pocket and wipe your hands on the clean rag. The next time your opponent attempts to deliver the affected woods they will squirm out of his two fingered grip like startled catfish. Sportingly hand him the rag from your LEFT pocket, he’ll assume it’s Grippo.

Some of you out there will probably say that I am being unsporting or that there is even an element of cheating in this tactic. I say to you, “All’s fair in love and bowls!”

Now, as I promised, my first video shot by our captain Jack Pryce and produced by Raymond. Raymond says he’s already posted it on YouTube and I could be on my way to celebrity status. Tell you one thing for a start, they won’t get me parachuting into that bleeding jungle!

In my next post I'm going to tell you beginners how to get your hands on cheap clothing and equipment. No it's not that eBay thing although some people will probably whinge about it being it in bad taste. There's always one moaner.
See you in a fortnight.

Get My Twits from Tweeter